Ralph is a wolf monster and is usually depicted as the third protagonist out of The Wrecking Crew, the other two being George and Lizzie.

He made his first debut in Rampage (1986), then reappeared in Rampage: World Tour, Rampage 2: Universal Tour, Rampage Through Time, Rampage: Puzzle Attack, and the most recent game in the series, Rampage: Total Destruction. He was also scheduled to appear in Rampage (cancelled Kinect reboot) but the project was sadly cancelled in late 2012. He is also one of the film Rampage's secondary antagonists alongside Lizzie and Brett.

In every Rampage game, Ralph, along with George and Lizzie, are typically mutated into monsters through experiments conducted at Scumlabs (or any other science-related quandary). These experiments go horribly wrong and transform them into giant monsters. This is the generic origin for most monsters that appear in the Rampage franchise. However it differs slightly in each game:

Ralph was an ordinary human until he became mutated by a food additive in a hot dog, becoming a giant sized wolf as a result. Coincidentally, Lizzie and George also became mutated into giant monsters. Throughout the game the trio desolate every high-rise city, destroying buildings, gorge on civilians, smash vehicles and eradicate offensive military forces which stood in their wake of destruction until they reach Plano, Illinois, the final level of the game.

Ralph is the only monster able to hold business men.

Ralph's origin is in fact asymmetrical to his origin in Rampage (1986). This time he is a scientist working at a Scumlabs facility until an explosion occurred, mutating him into a giant sized werewolf. Ralph, George, and Lizzie, mutated by the blast, travel the world to destroy all of Scumlab's bases and all of the Scumlabs employees.

At the end of the game, the last Scumlabs employee, Dr Elizabeth Veronica, tries to eliminate Ralph with a ray gun, only to have shrunk him and his friends, ending up inside her ship.

Ralph (along with George and Lizzie) are unplayable at the beginning of the game, as they are all imprisoned in heavy duty cages for the whole world to see. This is because Dr Elizabeth Veronica captured them once they were tiny. They are in New York City, Tokyo and Ralph was held captive in London. He awaits for his rescue when the newer monsters Boris, Curtis and Ruby are created from another explosion created during an experiment in a new lab in Salt Lake City.

Once Ralph's cage has been smashed open, he is unlocked as a playable monster. The code to play as Ralph is 'LVPVS'.

After Ralph, George and Lizzie have been freed, they are all playable during the invasion of the aliens when they attempt to conquer the Earth.

Ralph returns to Earth after having dealt with the alien invasion aftermath, smashing straight through the roof of the building housing the time machine and hopping in. He then immediately dashes towards the time machine, entering through the portal that opened up.

He and the rest of the monsters then begin to terrorize the past, present and future, thus creating a disruption through important events in history, messing up the time stream.

Ralph will occasionally climb the side of the bin vthe player is dropping blocks in and jump into the bin if the player has achieved a specific goal or objective.

In Rescue Mode, sometimes Ralph is imprisoned in a huge metal cage at the bottom of the screen until the player frees him by removing all the blocks on top of his cage before time runs out.

At the end of the game, when Ralph reaches the final Scum Soda base in New York City, a Scum Blimp will try to fire green lasers at him, of which deal a great amount of damage if the rays do make contact with him.

In the credits, Ralph can be seen standing on the left hand side of George.

Ralph had initially been confirmed for the new Rampage Reboot for the Kinect, but there has been no definite confirmation of his prior role in this game.

Andrew Baker, a graphics artist, drew up a concept of the new game, featuring Ralph, George and Lizzie on the front of it, including a few other mystery monsters, even a mech, covered in a silhouette.

This was revealed on March 29th, 2012 on Kotaku, Game Revolution and a host of other websites.

Ralph is one of the three monsters featured in the 2018 Rampage. In the movie, it appears that Ralph will be a mutated wolf instead of a human or a werewolf-like creature. Ralph may also be an antagonistic creature alongside Lizzie while George is more of a protagonistic creature. He is later killed by Lizzie when she decapitates him by ripping his head off of him and eating his head, leaving his headless body behind.

Through each game, Ralph portrays distinctly different physical characteristics. In general he is always depicted with having blue fur with peach colored skin highlights, a light blue underbelly, sharp claws on his fingers and toes, mean-looking pointy ears, sharp fangs/teeth, beard-like tuffs of fur sticking out either side of his head and a brown nose on the end of his muzzle. Ralph has digitigrade legs and a bushy tail flailing behind him.

Ralph's statistics such as weight have also been the same through every game too. He is considered as "average".

However in other Rampage games he cultivates a different appearance each time:

He had a grayish-white fur color with cream colored skin highlights and a white underbelly, red eyes, white claws on his fingers and toes, stout ears, sharp teeth and a black nose on the end of his muzzle. Ralph has straight legs and, funnily enough, has no tail in this game.

He had blue fur with peach colored skin highlights, a light blue underbelly, red eyes with yellow iris and black pupils, claws on both his fingers or toes, mean-looking pointy ears, sharp teeth, beard-like tuffs of fur sticking out either side of his head and a brown nose on the end of his muzzle. Ralph had straight legs, but still no tail.

Ralph's physical still undertook a similar appearance to that of World Tour and only some slight changes were made.

He had black/navy blue fur with peach colored skin highlights, no underbelly, red eyes with yellow iris and black pupils, cream skin, claws on his fingers and toes, bent and sleasy ears, sharp teeth, beard-like tuffs of fur sticking out either side of his head and a dark blue nose on the end of his muzzle. Ralph had digitigrade-esque legs and, for the first time, inhabited a bushy tail.

Ralph continued to reuse this physical appearance through both Rampage Through Time (2000) and Rampage: Puzzle Attack (2001).

He had blue fur with peach colored skin highlights, a light blue underbelly, white claws on his fingers and toes, mean-looking pointy ears, sharp teeth, beard-like tuffs of fur sticking out either side of his head and a brown nose on the end of his muzzle. Ralph has digitigrade legs and a bushy tail flailing behind him.

Ralph looked almost entirely different looking to that of his last-gen predecessors.

He had dark blue fur still, but he portrayed a much more brittle, shaggy and bulked-up appearance. Ralph also had tan colored skin highlights, a tan colored underbelly, cream claws on his fingers and toes, lent back, floppy ears, razor-like teeth, beard-like tuffs of fur sticking out either side of his head and a dark brown nose on the end of his muzzle. Ralph repossesses his digitigrade legs, loses his bushy tail and, surprisingly, has a brown loincloth wrapped around his waste.

As this is merely a concept, we cannot tell for definite if this was to be his final concept.

In the 2018 movie, Ralph is portrayed more wolf-like rather than werewolf-like. Ralph is quadrupedal instead of bipedal and can walk on all fours. His facial structure appears to be quite grotesque, due to the mutation caused by the serum. He possesses thumbs with slightly sharp ends on his front paws, bat-like ears, a single row of porcupine-like quills on his back that he can use as projectiles to shoot at targets with his tail and has developed flying squirrel-like skin membranes between his legs that allow him to fly and glide.

During Rampage (1986) and Rampage: World Tour, Ralph has equal statistics as George and Lizzie.

Ralph is a fairly rounded off monster, with stats similarly comparing to those of George's, except the ability to climb as George exceeds greatly in the climbing standards.

In most of the recent Rampage games, when Ralph eats a steak, it replenishes most (or all) of his health.

In Rampage: Total Destruction, Ralph has almost equal statistics as George, though Ralph has a better crush attack than George has.

Ralph's special is Super Howl. He unleashes a boisterous howl so loud that buildings simply crumble under the might of the deafening decibels. This ability is usable for Ralph in Rampage 2: Universal Tour and Rampage Through Time.

In the film Rampage (2018), Ralph has retractable skin flaps between his legs that allow him to glide and fly like a flying squirrel. He has large porcupine-like quills on his back and tail that he can shake off and use as projectiles to shoot or impale at enemies. His size is shown to be able to handle George as he was able to hold him down without too much difficulties. As he was a wolf before mutation, his stamina was high though with genetic editing, his attributes were enhanced as well. Ralph's stamina and speed is shown to be greater than George as the wolf was able to run much longer distances, fight off the military and even the mutated albino gorilla. Ralph was also able to leap high distances and can take hit from explosions on his face with little suffering. It was shown briefly that his combat might be little better than George due to Ralph being from the wild and likely knowing more of survival than George since the latter lived in captivity his whole life. 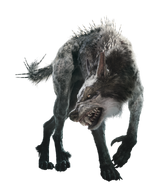 Retrieved from "https://rampage.fandom.com/wiki/Ralph?oldid=11953"
Community content is available under CC-BY-SA unless otherwise noted.