George is a gorilla monster and is usually depicted as the first or lead protagonist out of The Wrecking Crew, the other two being Lizzie and Ralph.

He made his first debut in Rampage (1986), then reappeared in Rampage: World Tour, Rampage 2: Universal Tour, Rampage Through Time, Rampage: Puzzle Attack, and the most recent game in the series, Rampage: Total Destruction. He has made a continuous appearance throughout the series. He is also the film Rampage's main tritagonist.

In every Rampage game, George, along with Lizzie and Ralph, are typically mutated into monsters through experiments conducted at Scumlabs (or any other science-related quandary). These experiments go horribly wrong and transform them into giant monsters. This is the generic origin for most monsters that appear in the Rampage franchise. However, it differs slightly in each game:

George was a scientist until he became mutated by experimental vitamins, becoming a giant-sized gorilla as a result. Coincidentally, Lizzie and Ralph also became mutated into giant monsters. Throughout the game, the trio begins to desolate every high-rise city, destroying buildings, gorge civilians, smash vehicles and eradicate offensive military forces which stood in their wake of destruction until they reach Plano, Illinois, the final level of the game.

George is the only monster able to hold the evil woman in red dresses to get rapidly increasing points, just as Lizzie can hold men in yellow shirts, while Ralph can hold businessmen.

George's origin is similar to his origin in Rampage (1986). This time, he is a scientist working at a Scumlabs facility until an explosion occurred, mutating him into a giant-sized ape. George, Lizzie, and Ralph, mutated by the blast, travel the world to destroy all of Scumlabs' bases and all of the Scumlabs employees.

At the end of the game, the last Scumlabs employee, Dr. Elizabeth Veronica, tries to eliminate George with a ray gun, only to have shrunk him and his friends, ending up inside her ship.

The Wrecking Crew are unplayable at the beginning of the game, as they are all imprisoned in heavy duty cages for the whole world to see. This is because Dr. Elizabeth Veronica captured them once they were tiny. They are in Tokyo, London and George were held captive in New York City. He waits for his rescue when the newer monsters Boris, Curtis, and Ruby are created from another explosion created during an experiment in a new lab in Salt Lake City.

Once George's cage has been smashed open, he is unlocked as a playable monster. The code to play as George is 'SM14N'.

After all of The Wrecking Crew have been freed, they are all playable during the invasion of the aliens when they attempt to conquer the Earth.

George was a man in his early 20s until he drank some Scum Soda, causing him to have a violent reaction, transforming him into a giant-sized Ape. He is one of the 6 initially playable monsters that broke out of his Cryo-Tube, along with Lizzie, Ralph, Rhett, Ramsey, and Gilman (and later 8 initially playable monsters on the Nintendo Wii version, along with Boris and Ruby).

At the end of the game, when George reaches the final Scum Soda base in New York City, a Scum Blimp will try to fire green lasers at him, of which deal a great amount of damage if the rays do make contact with him.

In the credits, George can be seen picking nits off Joe the Wildman's back. Later on in the credits, he is also seen standing in the middle of the screen, with the rest of The Wrecking Crew standing either side of him (just like the Main Menu logo).

In the film, George is the film's main tritagonist and is an albino silverback gorilla who was rescued by Davis Okoye from being slaughtered from poachers. When that happened the two shared a strong friendship after that. But then one night, George is sprayed with an unknown serum which crashed into his home. This serum caused George to become aggressive, as well as increased size, enhanced agility, with enhanced strength, and extreme regeneration. The main antagonist A.K.A Claire Wyden tries to shoot Davis but fails when Dr. Kate Caldwell feeds her to the George. She quickly realizes what is happening and gets grabbed by George getting devoured upside-down. During the end of the movie, George is returned to his normal personality, but is still a giant. He starts fighting both Lizzie and Ralph in combat, first hitting Lizzie with a building. With the help of his friend Davis Okoye, he leads Ralph to fight Lizzie, but she proved to be more dangerous. As Okoye is almost killed by Lizzie, George sacrifices himself to save his friend, as he is dragged and bitten repeatedly by Lizzie, getting hit by her tail club and tossing him into some bar which impales him.

Soon, George survives while Davis shoots missiles at Lizzie from a helicopter. However, Lizzie corners Davis and he was just about to be eaten. Until George leaps into the air with the same bar and kills Lizzie through her head and into her brain, killing her. He later messes around with Davis by faking his death and pretending to die from his wounds. Before Davis figures out that George is alive. The two then decide to clear the city of debris and evacuate civilians.

However, in other Rampage games he cultivates a different appearance each time:

He had dark brown hair color with cream colored skin highlights and a cream skin colored underbelly, sharp teeth, and red eyes. George had smoothed out fur and did not have a mohawk-esk tuff sticking out the top of his head.

He had brown fur with peach colored skin highlights, sharp teeth, a cream skin colored underbelly, a mohawk-esk tuff sticking out the top of his head, red eyes with yellow iris and black pupils and beard-like tuffs of hair sticking out either side of his head.

George's physical appearance still undertook a similar appearance to that of Rampage: World Tour and only some slight changes were made.

He had brown hair with cream colored skin highlights, a cream skin colored underbelly, red eyes with yellow iris and black pupils, sharp teeth, beard-like tuffs of hair sticking out either side of his head.

George continued to reuse this physical appearance through both Rampage Through Time (2000) and Rampage: Puzzle Attack (2001).

This is the most recognized and iconic image of George that everybody distinguishes him to be.

In the Rampage movie, George (played and motion captured by Jason Liles) is an albino gorilla who is quite playful and friendly at first. However, a serum causes George to become aggressive and violent and causes him to grow to a staggering height. George seems to have no mutations or differences in his design rather than being giant, whereupon Ralph and Lizzie in the film have certain animal-like features to their mutated body structure.

During Rampage (1986) and Rampage: World Tour, George has equal statistics as Ralph and Lizzie.

George is a well-rounded monster, with stats rivaling those of Ralph's. George's statistics such as weight have also been the same through every game too. In addition, his climbing skills have always been excellent in the recent Rampage games.

In most of the recent Rampage games, when George eats a banana, it replenishes most (or all) of his health.

In Rampage: Total Destruction, George has almost equal statistics as Ralph, though George can climb much faster than Ralph.

In the 2018 film, George has proven that his enhanced strength is able to fight off Ralph, though his combat might not be at great at first because Ralph has shown to be able to hold George down proven that George being in captivity don't have much of the survival. George is known by using objects against his opponents as he was able to knock down Lizzie. George even has proven to be able to climb on buildings and leap high distances. Though his speed is greater, but not as fast as Ralph and faster than Lizzie. 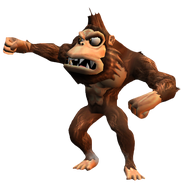 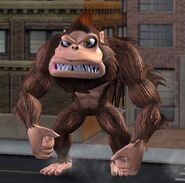 George, with Lizzie and Ralph 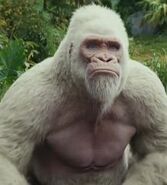 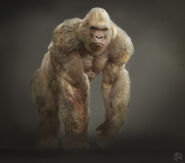 George in lego dimensions
Add a photo to this gallery

Retrieved from "https://rampage.fandom.com/wiki/George?oldid=12006"
Community content is available under CC-BY-SA unless otherwise noted.